Beatrice Adenga, the widow of the late revered TV actor Charles Bukeko, better-known as Papa Shirandula, has come out to condemn women saying they they had other children with his late husband.

Speaking during a brief burial ceremony on Monday, July 20, Adenga claimed the two women who surfaced after Papa’s death just want to cause chaos and drama and nothing else.

“Everyone knew Papa had one family, it is wrong for these small girls to start tarnishing his name, let us give him the respect he deserves.” She said

She noted that if anyone has legit evidence should move to court or get DNA done.

“If you have evidence you can go for DNA test or prove your claims in court, i will be ready to battle it out with you.” She said 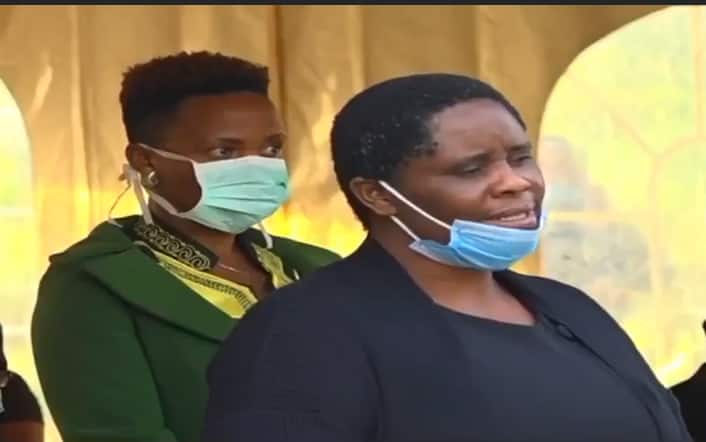 Beatrice was responding to claims after a lady stormed social media claiming she has a young child with the late actor.

The university student only identified as Purity said that they have been having a secret relationship with Papa and only her close friend knew that.

Purity said that she now has all the rights to gain from the wealth that Papa had made over the past years.

The lady said that she met Papa for the first time when he came at Multimedia university and that is where they started brewing their love.

She said that he had requested papa to help her get an actress job, but instead they had a romantic relationship that led to a bouncing baby boy. 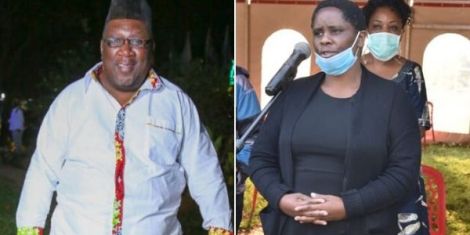 While giving testimony and narrating the life of her late Husband, Papa’s known wife said that she will not tolerate rumors and the life of Papa must be respected.

She also narrated how Karen hospital had abandoned her husband even when he had a serious health condition. She blamed Karen hospital for carelessness and promised to find justice for her late hubby.

She said Papa visited the hospital and requested for three tests for Pneumonia, Malaria and Covid-19 but the hospital reportedly only carried out one test.

“On Sunday, he revealed that he was experiencing cold. On Monday, I told him to make sure they carry out three tests at the hospital including pneumonia, malaria and Covid-19, because he had been mingling with many people.

“On Wednesday, he told me that ‘all the results are back but I am only seeing Covid-19’,” she stated.

His breathing worsened on Friday and on Saturday morning, Adenga revealed that she decided to take him to the hospital but due to delays, she revealed, that Bukeko would pass away in the car.

“On Friday, I observed the breathing had changed and Saturday, we took him to the hospital and we went to Karen. Admission was another process… He passed on sitted in the vehicle, he was not even admitted. I wish the doctors had done all the tests,” she explained while wondering why the doctors did not carry out the three tests as her husband had requested.

She also explained that the three tests were necessary since Bukeko had interacted with many people making him susceptible to the Covid-19 virus while the cold weather in Nairobi increased the risk of contracting pneumonia and Malaria.

Speaking at the funeral, Bukeko’s mother Valeria Wafula disclosed that he was not aware of his illness until Saturday when her grandson called her.

“I did not know that he had any ilnesses. I received a call from my grandson that he was in hospital at 9 a.m. and then I received another one from the grandson telling me he had passed away. My son was our breadwinner,” she stated.

His father Cosmas Bukeko, on the other hand, disputed that his son had died of Covid-19 demanding an explanation from the hospital.

“For now l cannot say anything about his illness until we sit with the hospital. I will travel to Nairobi and together with his wife, we shall engage a lawyer to get proper information from the hospital,” he stated.

Bukeko died on the morning of Saturday, July 18 with the family noting that he faced sudden breathing complications before being rushed to Karen Hospital where he passed on.

He was buried at his home in Busia County on Monday, July 20.

“Kenyans Must Come Out And Defend Me From Joho.” Edgar Pleads With Kenyans
Abeny Jachiga’s Side Chick Finally Visits His lover’s Grave With Heavy Security, Decline To Hand Over His Wealth As Directed By Elders
Advertisement