Former news anchor Betty Kyallo is open to starting over again and getting married only that this time she is not in a hurry and when it finally happens, the ceremony will be a more intimate affair with fewer guests.

Speaking during an interview with Billy Miya, the former K24 news anchor explained that she was looking to settle down with a divorcee just like her because they will both be aware of what it to takes to make a marriage work.

“I want a chunky man and I feel like for a man who is divorced, we can understand each other better. People have been chasing me but right now I am not in the mood and I just want to love myself,” she said.

Some of the things Betty ticked off her list was hosting thousands of guests at her wedding like she did before with her ex-husband, Dennis Okari.

The Flair by Betty owner stated that she preferred going to the Attorney General’s office to get their union formalized then later holding a small lunch at a restaurant nearby and call it a day. 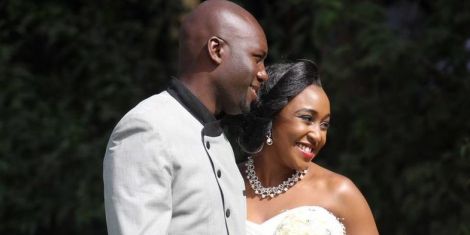 According to the TV siren, there’s no need to throw a massive wedding that will host thousands of guests and yet when you need help none of the 5,000 people will be there for you.

“Especially now I don’t want a big wedding. Just me and him at the AG’s office, we have our rice at the next restaurant, go home and ‘start life’. Honeymoon is fine but this thing of feeding 5,000 people at your wedding, is crazy. When things go wrong in your marriage, you will look for this 5,000 people and they will be nowhere to be seen,” she continued.

The mother of one went on to explain that she rushed into marriage without psychologically preparing for it. “The thing about marriage, at that time I was young, I didn’t want marriage as such and I didn’t see its meaning.

But right now, I have grown as a woman, I understand myself and I now know what I want. I’m ready to mend my ways so that I also get my ring. But now I’m not in a hurry, whoever God will send my way is who I will settle with.”

Betty also touched on her thoughts about her ex, Okari, getting married again stating that she is happy for him.

“You don’t need to put a brave face in public but behind closed doors, you two are not okay. I chose to be happy and I’m even happy for him.” The two recently came together after years of not seeing eye to eye to co-parent their daughter,Ivanna. “Right now I’ve grown so much…the person who used to be Betty two or three years ago is not the same person I am today.

There are things that we came to realize are very important about our lives; that it’s not just always about us as adults. So, yes, we are on very good terms with both him and his family and his wife…and we’re making sure that Ivanna is getting the love that she deserves; daddy and mummy’s love.

It is so important to nurture that relationship between a dad and his little girl,” she said in a previous interview.

Akothee: Poor Bloggers Like Edgar Obare Tried Separating Me With My Sister Cebbie, He Must Be Warned
Papa’s Wife: We Lost 4 Kids Under Unclear Circumstances, But We Kept Praying Since Many People Tried Bewitching Papa
Advertisement