Former CEO at Independent Electoral and Boundaries Commission (IEBC) Ezra Chiloba has finally ventured in farming as a way of surviving during the hard time.

“It is an agriculturally rich county,” he says.

“The only way I can tell the story of the place I come from is through farming.”Even as he went about his duties at the commission, farming was a lifestyle seared in his memory.

In fact, in 2015, Chiloba tried his hand in coffee farming.“I planted the crop on five acres,” he says.The crop failed spectacularly.

Why?“Because coffee is a very sensitive crop. Everything from clearing the farm, fertiliser application and pruning, to pesticide application has to be done right and on time,” he says.

In other words, he didn’t quite adhere to proper husbandry practices. But his biggest mistake was lack of dedication.“At the time I was not paying much attention to the farm. Telephone farming is truly a recipe for failure,” he says.

Chiloba said that he had made a lot of mistakes in the past and he just need to bring everyone on board forget the past and move forward.

He said that it is in good spirit that he meet Raila and his team to apologize and just make things easy between them.

“Sometimes we just need to have tea with those we wronged, so that the ghost of the past do not continue visiting you. I just want to meet Raila with his team and we try to clear the past and move forward.” He said

His acrimonious exit from IEBC is well remembered by the news savvy.He refers to what transpired as a crisis: a crisis that not only rendered him jobless, but also took away his peace of mind.

“It took a crisis for me to see the opportunities in farming,” he says.“I figured I would be busy and have a healthy mind on my journey to other opportunities.”

His next course of action was to plan, research and experiment with a few options.First, he collaborated with a friend to farm passion fruit on one acre. He also planted bananas, solo, on another acre.

After months of speculation, while still ‘experimenting’ with passion fruit and bananas, Chiloba made up his mind to go into growing maize to make silage.

In Trans Nzoia maize farming – for human consumption – is common. Due to saturation it does not offer much in profits.But maize for silage was a unique concept. It was an area that had not been explored fully in the county.He says:

“A friend (who is also an agronomist) introduced me to maize for silage. He was working on a similar project himself.“Initially I wanted to set up a dairy unit. But the entry strategy was too demanding in terms of costs and sophistication.

“I consulted others as well. Armed with information from earlier entrants we decided to go into silage farming.Thus began the story of Hilmost Farms – managed by Kitale Hilmost Ltd. In May 2019 Hilmost planted its first-ever maize crop – which Chiloba says was largely to try it out. 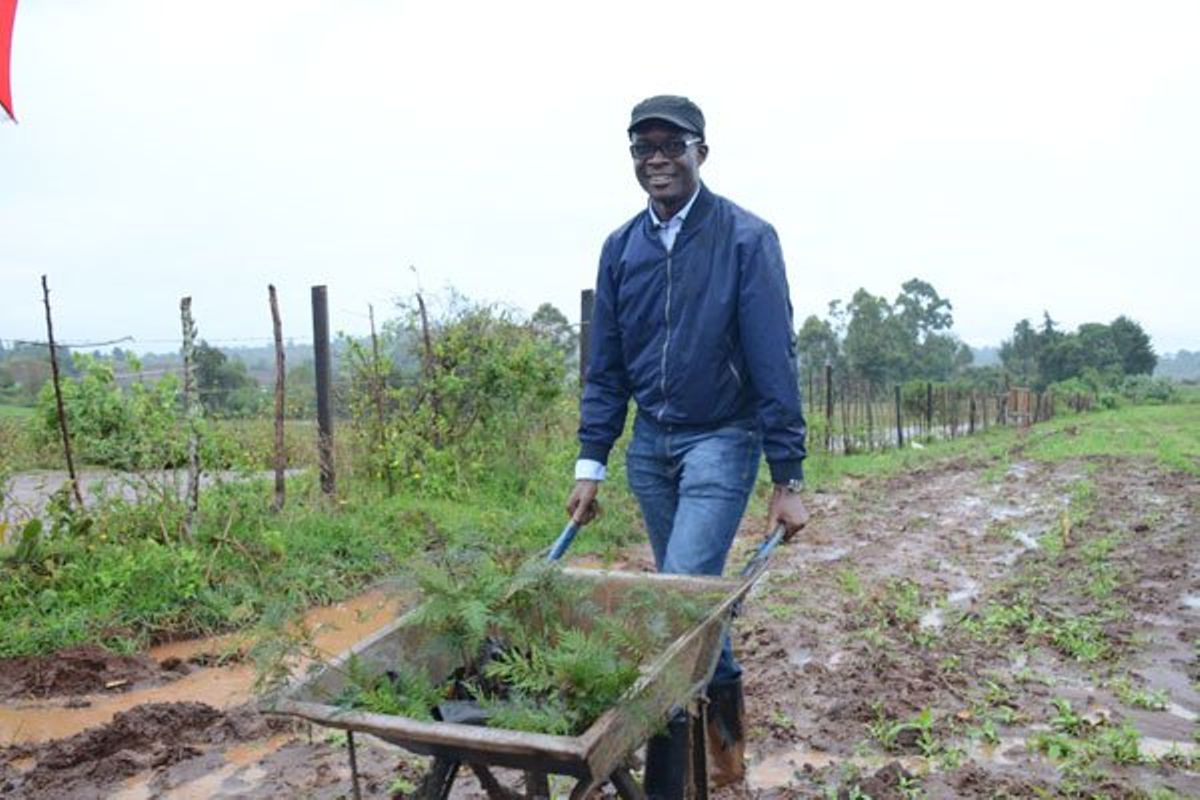 “The maize growing season in Trans Nzoia is in March. So, in May, we were already two months late.

“To make up for time lost we planted a maize variety that matures faster – in about three months.“Based on our experience in 2019 and the lessons we learnt we decided to go big,” Chiloba says.

This year Hilmost has 400 acres under maize for silage. The farming plots are largely leased through a joint initiative where farmers offer up their plots for a share in the profits.

“Farmers with large parcels of land – 100 acres or more – give us the right to grow on their farm. We agree on a profit sharing margin and we as Hilmost do the rest,” he explains.

A lot of the processes being undertaken by Hilmost Farms is based on professional advice. Everything is done by the book.

Each project, Chiloba says, is led by a farm manager. Every two weeks an agronomist visits to assess the crops. Soil testing is done at various stages to determine fertility and inform fertiliser use.

“We keenly monitor growth in every section of our farms. This is because fertility is not uniform: some patches need more or less of a particular nutrient.”

Everything – from harvesting in the field to processing of the silage – is done using farm machinery designed for the job.In their 2019 pilot project, Hilmost harvested an average of 12 tonnes per acre. However, when everything works out, farmers can harvest 18 tonnes.But farming has a great deal of uncertainty: a lesson Chiloba is learning as he literally ploughs through this new gig.

He describes farming as ‘high risk and high potential’. “If you want to be successful in farming you have to be patient and resilient. You have to be willing to stay the course, put in the hours and fail as you learn through your mistakes.

“Pests are a source of a catastrophe: take fall army worm for instance. If you don’t act early you can lose the entire crop in three days.“Cash flow is a challenge too: where do you get funds to mitigate against emergencies like pest?“And then there is the weather and the constant threat posed by climate change. Between March and May last year there was a drought which affected our bananas,” he says.

In Hilmost’s case there was another challenge connected to soil properties and the weather – farm accessibility by heavy machinery.Last year, of 90 acres planted, the business lost 20 acres despite a bumper harvest.“It rained and the soil became wet.

This made it difficult for the heavy farm machinery to access some of our plots. And so, technically, we lost the crop,” Chiloba recalls.The former IEBC man is humble in his description of the enterprise. He says he is not yet a ‘successful’ farmer.

But he is laser focused on achieving that success, “in five years or so,” he says. One of the things he is doing right, according to him, is being present and actively involved.He is dedicating about 40 per cent of his time on farming.

From time to time he travels to the farm to monitor progress and receive updates.Maize for silage is harvested whole, chopped into pieces, fermented under anaerobic conditions and compacted for storage.

Silage can remain viable for two years or even more. This longer shelf life means that post-harvest losses are reduced.Farming, Chiloba says, gets better with time as the farmer learns from their mistakes.He started off with coffee and lost some of the crop.

He has since revived the coffee fields. This year, the coffee farm should be yielding its first significant harvest.The passion fruit field is now cleared due to a soil borne virus that infected the crop. But before that the crop enjoyed an unexpected success.

“We harvested every week for 13 months. In total, we got 6,700kg worth of harvest, which we sold at the Kitale market,” he says.The bananas, too, did well and are still being sold at the market today.Chiloba’s advice to other prospective farmers is to have patience, focus and be ready to learn through the process.

Kuria: I stopped Miguna From Strangling Uhuru During The Heated 2007 Presidential Elections At KICC
Irungu Kang’ata: ODM Cannot Do Without Us, We Will Abandon BBI If They Won’t Support Revenue Allocation Bill
Advertisement