Days after former IEBC Commissioner Roselyn Akombe said Chris Msando, the commission’s slain ICT manager, was led “to the slaughterhouse” by commission insiders, former CEO Ezra Chiloba has hit back at her.

Akombe took to Twitter on Sunday morning to say Chiloba sent her an email warning her.

On 29 July, I said I will testify at an independent judicial inquest into the murder of my colleague Chris.

It confirms my call for an inquiry. Kenyans deserve the truth. I owe it to you.#JusticeforChrisMsando pic.twitter.com/rHJbXZXfDy

Akombe had said she is willing to testify at an inquest, if there is one, and likened the killers to Judas Iscariot.

At the start of August Akombe updated her Twitter profile picture with the quote: “”History will not be kind to us. So you have a moral obligation, a mission and a mandate, to speak up, speak out and get in good trouble. You can do it. You must do it. Not just for yourselves but for generations yet unborn.” 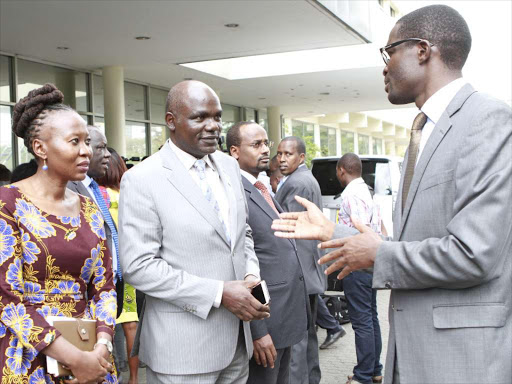 The quote is by John Lewis, a civil rights leader who died last month.

Lewis was one of the “Big Six” leaders – which included Martin Luther King Jr – of groups who organized the 1963 March on Washington, and he fulfilled many key roles in the civil rights movement and its actions to end legalized racial segregation in the United States.

Akombe has said  authorities are not willing to arrest Msando’s killers, accusing the ODPP of laxity.

Three years ago, Msando’s body was found in a thicket at Muguga Forest in Kikuyu — a killing that almost threw the August 8, 2017, polls a week way into disarray.

He had been tortured, his hands and arms and back cut. It was said a hand was broken because his killers wanted his password to the election results transmission system. The postmortem showed only deep cuts. He was strangled.

Msando had promised he would ensure the IEBC tech system in the 2017 elections was foolproof. President Uhuru Kenyatta’s victory was later nullified by the Supreme Court citing irregularities in the process. He won, however, in a rerun.

Akombe, in a series of tweets, put the IEBC on the spot, saying Msando’s colleagues sold him out to his killers.

She had fled to the US, claiming her life was in danger, and returned to work for the United Nations there.

“…Painful that instead on this day three years ago, your own colleagues led you to the slaughterhouse. Like Judas, they sold you for thirty cents, “Akombe had tweeted.

“We will find justice for you, no matter how long it takes,” the former commissioner said.

But IEBC chairman Wafula Chebukati said it was unfair for Akombe to speak three years later yet she was around when the murder took place.

“We all want to see justice for the family of Msando and for Msando. We have said this right from the beginning,” Chebukati told the Star.

Akombe should help authorities solve the murder, he said.

“It appears there is something she knows which we don’t know. I believe she should provide that information to the investigative agencies. Perhaps it will help for the investigations to be completed,” Chebukati said.

He said his commission did everything possible from the outset to help solve the murder.

The IEBC boss said that if Akombe is in any way unable to present herself to the DCI, the police can arrange to take the information from her.

Alex Mwakideu: Do Not Trust Women Not Even Your Wife, Trust Only Your Mother
Mbadi: Luo Youths Must Stop Visiting TangaTanga Homes Asking For Money, Or We Will Be Forced To Take Action
Advertisement