Wambui Karimu, wife of the late Safaricom CEO Bob Collymore has told off Kenyans to stop peddling rumours and focus on other activities that could help the country.

Wambui said that she was worried the way many Kenyans are peddling a lot of rumours with her name and issued a stern message to media reporters in Kenya.

The publicity-shy, career artist took issue with the publication of details of the late Collymore’s last wishes contained in his Will.

Kamiru took to her social media pages to address the publication of her late husband’s wishes and the realtionship she has with the Boys Club, emphasizing that reporters ought to have concerned themselves with content that could “inform, educate and empower” Kenyans.

She went on to state categorically that she has deliberately turned down various media engagements because she does not consider her personal life “newsworthy”.

“Since 2016 when my name first appeared in press concerning my private life, I have done some interviews and turned down a lot more than I have accepted. Often my interviews are focused on the work I do in the hope that it educates and empowers others. My argument has always been that my personal life is not news worthy,” she stated.

She went on to share links to articles published by various local and foreign media houses under a hashtag “#StoriesIWantToRead” asking reporters to give prominence to such stories instead of her private life.

Wambui further asked members of the fourth estate to go back to the kind of reporting which “spoke truth to power” instead of wasting its audiences.

“We also don’t have much time to waste. I am not the news. The news is what we are leaving in the dark. Media can determine the future of our country everyday, on that front page by casting light into the dark. On just that one page, media can make or break us as a nation. It is time,” she stated.

She also had time to respond to reports by local blogs saying that she was pregnant, saying that those are malicious and unfounded.

“I still have a close relationship with the Boy’s club, I’ve never left them. They keep visiting me, but i cannot have any relationship with any of them. People Must Learn to be nice to me and my family.” She said

Earlier the Citizen’s TV news anchor Jeff Koinange denied claims by a local blog that he had aromatic affair with the wife of the late Safaricom CEO Bob Collymore.

Jeff said that he was perplexed that some people would spread such a serious rumor about him since he is a respected journalist in Kenya. 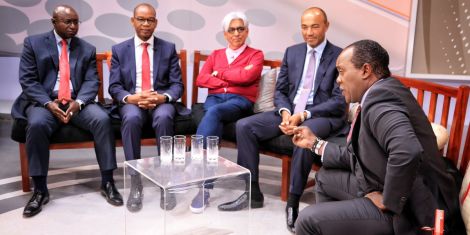 “I wonder what people get when they continue to soil my name, I just don’t get it. I’m so sad when I can be linked to my friend’s wife. That is something not to joke about.” He said

He said that together with the Boy’s club members they will still respect Bob’s wife np matter what happens.

“We still have a lot of respect for Bob’s wife, let bloggers not spread unnecessary rumours and jokes. And if Wambui is pregnant that is his own life why must people dwell in that?” He posed

“My Broke Boyfriend Kicked Me Out Of His Mabati House In Umoja” Kenya’s Popular Gay Remembers
“You Are A Disgrace, Shame On You,” Mercy Masika To Gospel Artists Turning Their Music To Business!
Advertisement