A wife of a cheating husband has had the bath of her life after she was pushed inside a swimming pool of a hotel during an unexpected confrontation.

According to TUKO,  a woman who appeared to have been suspecting her husband of cheating confirmed her suspicions at a hotel.

While the husband and his girlfriend were having some fun at a hotel, his wife who was tracking them all along showed up and started demanding explanations.

In a matter of minutes, the issue escalated and all three people involved in the scuffle were up on their feet and speaking on top of their voices. The lady’s husband tried de-escalating the issue but his wife was having none of that and wanted to know why she was being cheated on.

While confronting the husband, the side chick wanted to vanish from the scene but the wife held her tight and asked where she thought she was going. The side chick managed to break free and was exiting the hotel when the wife followed her in a bid to get confrontational with her. 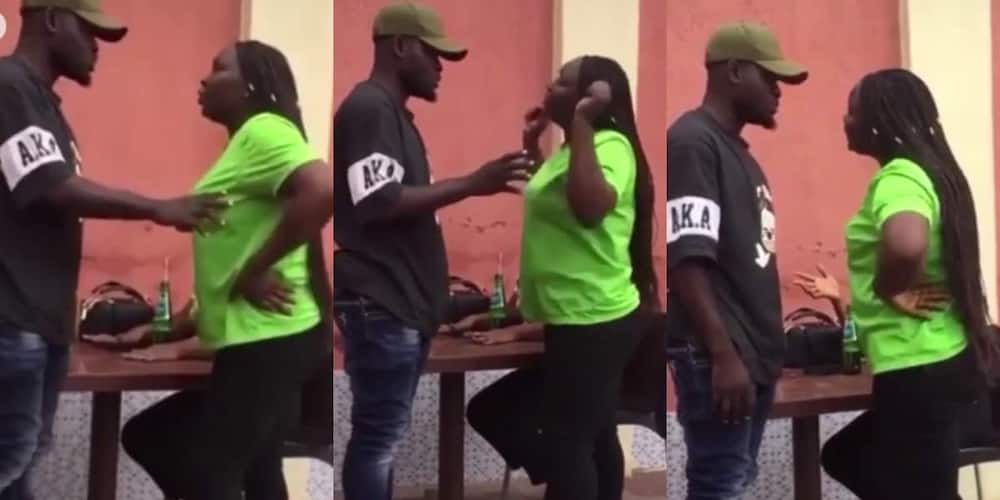 While they stood facing each other about to engage in what looked like fisticuffs, the side chick shoved the man’s wife and it landed her in the swimming pool.

The husband then rushed to the pool and asked why his side chick would push his wife into the swimming pool. According to the side chick, she had had enough of the man’s wife hence her decision to get rid of her and make for the exit.

Meanwhile, a Ghanaian mother recently gave her daughter a lesson of a lifetime after she barged in on her enjoying a dancing session instead of running an errand for her.

In the posted by dailycelebritiesnewsdotorg in Instagram the young lady was seen dancing to Fameye’s song in what appeared like a single room. All that while, she was supposed to be running an urgent errand for her mum who was outside the room waiting on her so she could finish what she was doing.

Here is the video;

Man caught cheating. Sidechick pushes wife into pool. What would you do? #dailycelebritiesnews

“You Are A Product Of Sponsors, You Didn’t Work Hard For Your Wealth” Kenyans To Akothee
Aoko Otieno: Vera Sidikia Needed A Brain Transplant More Than Boobs Transplant
Advertisement